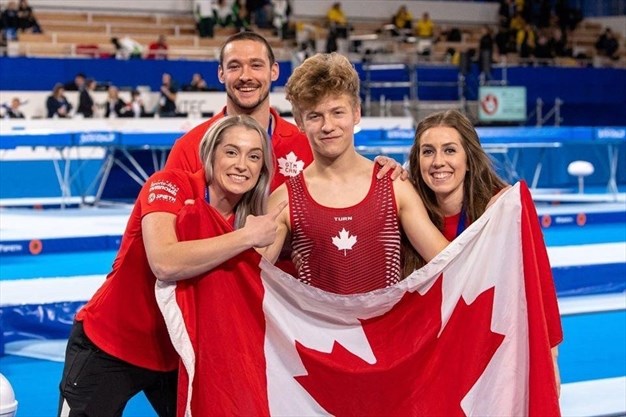 When Kieran Lupish landed his final pass in double mini-trampoline at the 2019 World Age Group Championships in Tokyo, he knew he had just earned himself a medal.

Everything leading up to his final pass, however, was far from perfect.

“I was having a really bad warmup on the pass. I was falling, and I couldn’t land it,” said the 16-year-old from Vineland, who added that athletes warm up in a separate gym before performing on the main stage.

When he entered the main gymnasium, he was told to wait a couple of minutes because the organizers were figuring something out. He eventually got the go-ahead to perform his final pass.

“When I landed and stuck it, I instantly thought I medalled,” said Lupish. “It was the craziest feeling.”

From there it was a waiting game. He came into the championships ranked fourth in the age group of 15 and 16, and performances are done in reverse order based on the rankings from the qualifying tournament.

After his pass, the three athletes ranked ahead of him still had a chance to outscore him.

“I saw the first kid land and thought, ‘That wasn’t the score that was going to beat me.'” he said.

He then watched the final two athletes perform.

“The last kid who went is really good and, when I saw him land, I was just waiting for the score to pop up,” said Lupish.

With his family watching from the stands, he looked up at the scoreboard and saw “second” next to the name of the No. 1 athlete.

“I was like, there’s no way this happened,” Lupish recalled. “I just remember my coach grabbing my shoulder and going, ‘World champ, buddy!'”

It was Lupish’s third time participating at the world championships for Canada. He fell short of the podium at the first two.

Five years ago, Lupish never thought he would be performing at the world championships in trampoline. He initially got into gymnastics and eventually became a high-level gymnast until he hurt his shoulder, which caused problems in a lot of events.

“I ended up getting bored with the sport since I couldn’t do much, so I ended up quitting,” he said.

Introduced to trampolining through his mother’s friend’s daughter, he decided to give it a chance. In just two years of the sport he was performing at the world stage, finishing fourth in double mini-trampoline at his first world championships.

What was the coolest thing about finishing first?

“Normally, when you come third or second, they don’t play your national anthem,” said Lupish. “They played the national anthem, and I just wanted to get up on the podium so badly I actually stepped up a little earlier than I was supposed to.”

He was one of four Canadians who participated in more than one event at the World Age Group Championships. He also performed in synchronized trampoline, but he and his partner from British Columbia had never practised together before executing their routine in front of the judges.

The next goal for Lupish is moving up from Canada’s junior double mini-trampoline team to the senior level when he turns 17. He said this year will be about gaining experience, and then he’ll aim for it all.

“If you win at the senior world championships, you’re the best in the world. Period,” he said.

Double mini-trampoline isn’t an Olympic sport, but it is something people in the field are pushing for since trampolining is part of the world’s biggest sporting event. If it becomes possible, Lupish hopes to represent Canada in 2024 or 2028. 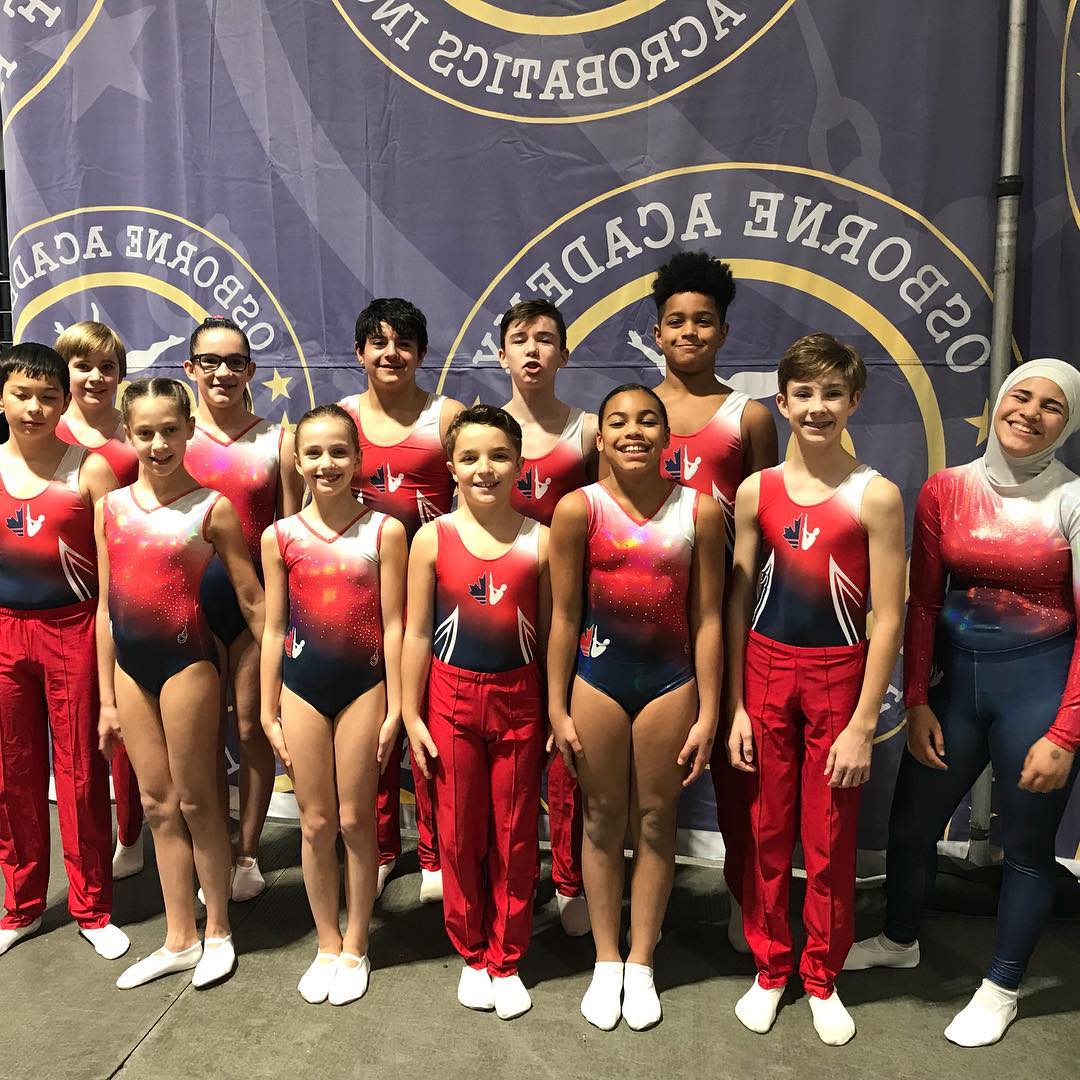 Congratulations to all the athletes who competed at the 1st Ontario Cup for Trampoline and Tumbling!!! The 3-day event took place in Oshawa, Ontario from February 8-10.

Overall, the team had some great results, with many athletes placing in the top 8.

On Day 1, the TnT’s kicked off the competition with some medals in Synchronized Trampoline. Nicholas U. and Maksim S. took silver for their performance in Level 3 competition. Carter W. and Ma’Ayan K. teamed up in Level 2 competition and came away with 8th place.

More medals were won in Trampoline! Ma’Ayan K. took home a gold medal and Maia B. came away with a bronze medal in Level 2 trampoline. Vince G., Carter W. and Jayden R-C were 4th, 5th and 8th in Level 2 men’s 13 and under, while Nicholas U. took 6th in Level 3 and Matthew D. was 7th in his Level 2 age group. James B. just missed the podium in 9th. Hanna W. earned a silver medal in Level 5 women’s while Chris U. also took home a silver in Level 5 men’s. Sienna G. and Hannah P. just missed the medals in 4th place in Level 2 and Level 4 respectively.

In Tumbling, Ema B. took home a silver medal while new teammate Julianna was 4th in a large field of Level 4 competitors. Both Victoria and Ma’Ayan were 5th in the Level 1 and Level 2 respective levels. Olivia B. and Andrew G. just missed medals in 4th place for Level 3 and Level 1 respectively, while Maksim S. placed in 7th.

Another big “first” for the TnT: our Muslim trampoline and tumbling athletes were the first to compete at an Ontario Cup!! Way to go!

Finally, a special CONGRATULATIONS to Ema B for hitting the mobility score her first time out as a Level 4 and becoming TnT’s newest national athlete!!

Overall it was a great 1st Cup…can’t wait for the 2nd Cup in Niagara Falls in March….stay tuned! 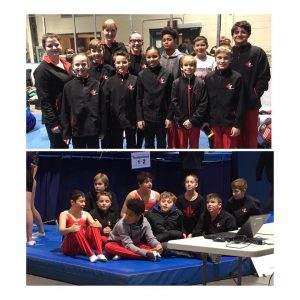 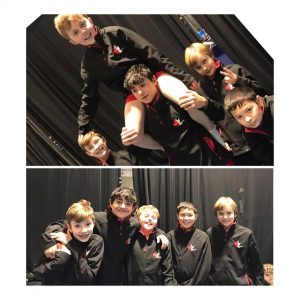 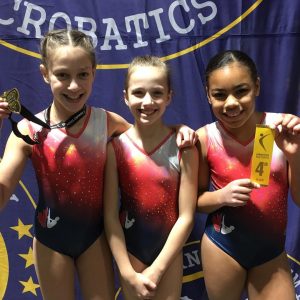 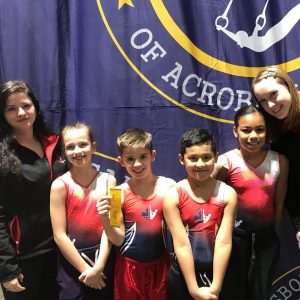 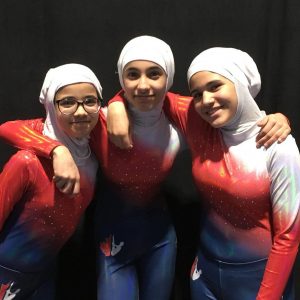 our Muslim trampoline and tumbling athletes were the first to compete at an Ontario Cup!! Way to go!